Wilhelm Knechtel, head of the royal gardens during the reign of King Carol I, honored at the “Friedrich Schiller” 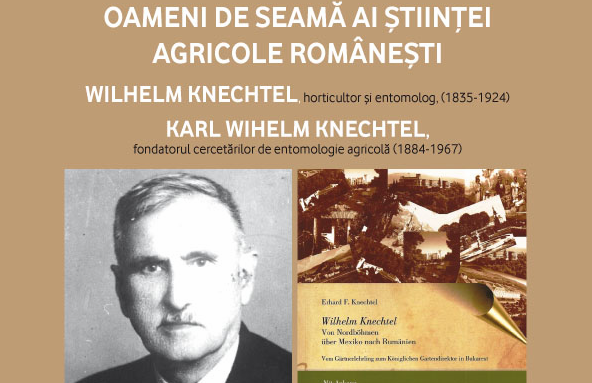 House of Culture During the events dedicated to the scientific personalities of the History of the ethnic Germans in Romania, the Bucharest City Hall and the House of Culture “Friedrich Schiller”, “on Thursday, July 15, 2021, the debate conference“ Outstanding people of Romanian agricultural science. Wilhelm Knechtel, horticulturist and entomologist (1835-1924) and Karl Wilhelm Knechtel, founder of agricultural entomology research (1884-1967) ”. The event is organized in collaboration with the F.D.G.R. Regional Forum-Extracarpathian Region. “The work of scientific research is a good earned by us, which belongs to us forever and which no one and nothing can take from us” (Wilhelm Karl KnechteL, Member of the Romanian Academy.) Presented by: Dr. Cristian Scarlat, Dr. Klaus Fabritius, President of the F.D.G.R. Regional Forum – Extracarpathian Region. Participants: Christiane Gertrud Cosmatu, President of FDGR, Bucharest. Project coordinator: Aurora Fabritius. “Wilhelm Knechtel (1835-1924) was a famous horticulturist, a skilled landscape painter, a professional botanist. From 1870, he entered the “service of the gardens” of the Romanian ruler, Carol I. In fact, his name rarely appears, and then only in his capacity as head of the royal gardens, or head of the Public Gardens in Romania. He also became a lecturer in Viticulture, Horticulture and Entomology at the Central School of Agriculture in Herastrau – Bucharest. Among other things, he designed the Peles Palace Park: In Sinaia, all around the Castle were built, according to the King’s wishes and under the leadership of the head of the royal gardens – forest engineer Wilhelm Knechtel, roads, paths and trails that crossed the forest through the most beautiful places, under firs secular and old beeches, covered with moss, remained there as God had left them. ” Wilhelm Knechtel’s name is also linked to the modernization of Cismigiu Garden, through landscaping and regularization and beautification. the lake. Wilhelm Knechtel was also a passionate numismatist, a great collector. For years he was a member of the committee of the Romanian Numismatic Society, in the founding of which, in December 1903, he participated. He made good use of his numismatic knowledge by publishing interesting articles about the valuable pieces of his own collection. ” (Dr. Cristian Scarlat) Wilhelm Karl Knechtel (1884-1967) is one of the most representative personalities of Romanian entomology, a specialist of international prestige, who has carried out a complex scientific activity, materialized in over 120 specialized works in the field of systematics, fauna, zoogeography, ecology and pest control, activity carried out over 6 decades. The notoriety of academician W. K. Knechtel has long crossed borders, being requested by many specialists from other countries. He is considered the founder of the School of Agricultural Entomology, a university professor in Bucharest where he studied, completing training in the field of plant protection in Stuttgart, Naples and Berlin. Among his important works we mention the research on harmful insects in Romania and their control, the study on insect epidemics, the description of 14 new species for science, several volumes on insects from the Romanian Fauna Cycle edited by the Romanian Academy, conducting general and applied entomology research. He pointed out the role of entomological resorts since 1928 and the importance of studying entomology in Romanian agriculture in 1939. WilhelmKarl Knechtel earned a leading place among the great Romanian entomologists through his vocation and sustained, meticulous activity. (Dr. Klaus Fabritius) The event took place in Romanian. Starting with July 23, 2021, the event will be available on the institution’s website and Facebook page.